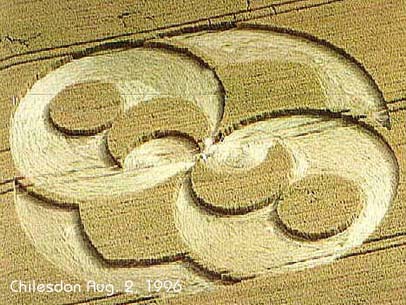 “When the Moon appears on Earth, the time of changes is imminent.” Hopi legend

Crop Circles are geometric impressions, typically found in cereal crops – wheat, corn, rapeseed and barley being the most common. They are bent stalks of grain that form precise mathematical imprints in these crops.  Often a nodule is formed at the bend joint, possibly caused by cellular swelling, as heat is a measurable effect, both in the crop and in the ground beneath it. Therefore, the general consensus is that these formations happen rapidly; otherwise the fields would be incinerated.  Instead, the affected crop continues to ripen, although some grain and soil components become physiologically altered. Magnetic and static electrical deviations have been recorded and electronic equipment often malfunctions in fresh crop circles as well.  Headaches and sometimes nausea are not uncommon among the investigators.  Occasionally “strange lights” have been seen in the skies at night over the field where a new formation appears. See for yourself at: http://www.youtube.com/watch?v=6M6vP8-SbU0

WHERE ARE THEY FOUND?

Crop circles have been reported around the world, often located near ancient sites of worship. But the vast majority and most stunning impressions have consistently been found in Wiltshire County, southern England, especially within a 15-mile radius of the ancient stone temple of Avebury.  Karen Douglas Alexander, wife of Steve Alexander, one of England’s best crop circle photographers, considers crop circles to be a “mysterious ritual being played out in secret on our sacred landscape.”

Although observed from time to time over the centuries, the first modern “crop graffiti” weren’t reported until the mid 1970’s.  Many theories were put forth to account for the mysterious appearances: gravity, piezoelectric generation, static energy, whirlwinds, magnetic energies, solar or thermal causes, etc. But as the crop circles became more intricate, and formations were reported just as readily on rainy nights as dry, the earth-based theories fell away.

Debunkers went into the fields at night, stomping down crops in an effort to prove that the aberrations were man-made.  But such attempts lacked the geometric precision, the broken grain never ripened, and the impressions showed none of the electro-magnetic anomalies or design details, such a swirled tufts, that were found in “real circles.”

The 1980’s and early ‘90’s brought forth mostly single or small clusters of circles, dumbbells (2 circles joined by a line), and later simple pictographs.   But by the late 90’s the crop circle phenomenon took a quantum leap as the impressions became increasingly more complex and beautiful.  Sacred geometry, spiritual symbols, creatures of the earth and sea, star shapes, 3-D mobius bands, fractals, magnetism and dimensionality began to appear.  Whatever else they might be, crop circles were becoming stunning works of art!

Keith Casburn, author of Principles of the Universe, has a unique take on the phenomena. He considers crop circles to be “physical manifestations of the tunnels of energy that are entering the Earth … enabling the Earth itself to draw towards it what it needs, allowing it to experience its own evolution.”

Lately it’s become more common for the impressions to be formed over subsequent nights.  An amazing formation this summer of 2009 began on the night of June 21st, expanded the following night, but wasn’t completed until June 30th when several long strands of “code” were added. Similar code showed up with a “swallow” formation a few nights later.  Was this code a language, or a computer chip array?