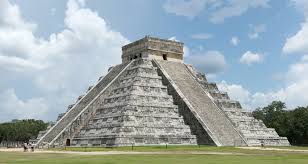 There is much controversy around the Mayan Long Count of 5,125 years, which culminates on December 21, 2012. That day marks an alignment of our Solar System with the “dark rift” CENTER of the Milky Way Galaxy.  The “exact center” for such extremely large galactic alignments could certainly be up for debate and according to Dr. Calleman, the alignment already happened last October 2011.  Whatever the date, we are within the TRANSITION WINDOW that extends over decades.

One outspoken interpreter of the Mayan “end-times” was Jose Arguelles, author of The Mayan Factor, written in 1987. According to Arguelles (but not all Mesoamerican scholars agree with him), there were 7 Mayan Prophesies that were “written in stone”.  Here they are:

First Prophesy:  Magnetic Pole Shift – The Mayan believed that the end of each 5,125 year Long Count marked a “destruction” of the Earth in order to cleanse and purify it in preparation for the beginning of a new Age.  The prophesy says the Sun will receive a force from the Galactic Center that will change magnetic polarities on the Sun, causing the sun to emit an immense burst of solar radiation that will cause a corresponding magnetic pole shift on Earth.  Such an event would cause extreme storms, volcanic eruptions, earthquakes, and tsunamis – resulting in MAJOR EARTH CHANGES!

The fact is that the earth’s magnetic poles ARE definitely “shifting” and the North Magnetic Pole IS moving about 40 miles/year towards Siberia.  Runways in the UK and Florida have been renamed due to the change.  Solar flares are increasing, disabling communication satellites.  Aurora borealis “lights” are seen further south than usual.  Extreme storm systems are wrecking havoc.  2012 coincides with an approximate eleven-year solar flare maximum period as well.

Research shows that during the last 200 million years a total true polar wander of some 30° has occurred, but that no super-rapid shifts in the Earth’s pole were found during this period – Wikipedia.  “There definitely won’t be any break-up or shift of the continents”, say the scientists.  “Reversals take a few thousand years to complete and during that time… the magnetic field… gets more complicated,” says Glatzmaier of NASA.  The last reversal happened 780,000 years ago during the Stone Age.

Second Prophesy:  Social Polarities, Conflict & War in the Middle East & Asia – The solar eclipse of August 11, 1999 (when the planets formed a cardinal cross in the sky) cast a shadow across Kosovo, the Middle East, and then into Pakistan & India – predicting areas of conflict and war.  This has pretty much come to pass, although the process may continue to deepen into Iran and India.  This 2nd prophesy also speaks of the manifestation of Heaven and Hell on Earth, a sort of “winnowing of the wheat from the chaff”, where individuals choose by their thoughts and actions one path or the other – either a life moving toward understanding and compassion, or one of materialism, ego and greed.  In these times, many healers will come forth, but there will also be many charlatans and false prophets.  Destruction and Evolution will occur side by side.

Third Prophesy:  A devastating Heat Wave is predicted on an unprecedented scale, to occur with astounding speed, caused in part by the anti-ecological choices made by man, resulting in global warming, combined with extreme solar activity.  Some believe another factor at play here is that our solar system has entered, or is about to pass through a torus-shaped region of space known as the “photon belt”, believed to be related to the Pleiades and the Galactic Center.  As we speed through the rings of this toroid field in our “space envelope”, a higher density of particles in space causes more friction between the interstellar winds and our solar system’s heliosphere, as well as between the solar winds and the Earth’s outer atmosphere, triggering severe storms and increased tectonic movement.

Fourth Prophesy:  Melting of the Poles – Continuing on this theme of excess, increased solar radiations cause rising planetary temperatures that lead to the melting of the poles. The consequences of this are the slowing and cooling of the ocean currents, creating coastal devastation, forcing marine habitats and migrations to be altered, impacting fisheries, changing weather and growing cycles, and thus disrupting food production and distribution, generating famines and dislocated peoples. This 4th prophesy is based on Mayan knowledge of the Venus Cycle.  Every 117 cycles of Venus, the Sun undergoes cosmic alterations that translate into solar flares and solar wind eruptions.  But every 5,125 years, even greater perturbations are expected to occur.

Fifth Prophesy:  Within a few years, a Comet (“wormwood” in the Bible) will appear, auguring Great Change.  Its passing disrupts Earth Systems and brings destruction on a massive scale.  BUT suffering expands one’s awareness and leads to compassion and understanding.  This “Quickening” also has ramifications in social, political and spiritual arenas, where increased frequencies and “acceleration” are being felt on many levels – raising personal accountability, activating participation in the changes taking place around us, expanding consciousness, etc.  Despite the difficulties of such tumultuous times, there is much to be learned through this transformative process.

Sixth Prophesy:   TELEPATHY leads to Transparency – Along with heightened sensitivity to our environment and each other, increased TELEPATHY will take root.  The status quo will be examined, leading to exposure of all that is false.  This will force CHANGE!  A new era of truth and light will begin, and it will lead to the formation of an international community without borders, under one-world governance that benefits the whole planet, its various species, and all of humanity, without discrimination or corporate greed.   The Peoples of the World will come together cooperatively for the Greater Good of All!  Society will be transformed as our collective consciousness evolves.

Seventh Prophesy:   A New Age of Light Dawns – Systems built on fear will fail, and a New Galactic Dawn of Peace and Harmony will prevail.  Herein lays the HOPE of the NEW AGE, that beyond the travails of a difficult passage, a true transformation of our species can occur and the Earth can be reborn into a more conscious, sustainable, cooperative society, administered fairly, with all resources and energy shared. Poverty, social unrest, economic inequality, and disease can all be eliminated through cooperation.  Hopi Elder Lawrence Namoki says, “The opening doorway of baktun 13 (Dec. 21, 2012) offers us conscious relationship with each other and a creative participation with the Earth process that gives birth to our higher selves.”  He awaits the coming of the Blue Star Kachina to bring positivity to a transformed world.

We can focus on “how bad things might get” or we can work towards and visualize “a Golden Age on Earth”.  We can also heed the warnings of such prophesies by expanding our survival skills while learning to live cooperatively together in community.  Isn’t that what Crestone is all about?